Pooling data that are reported inconsistently

Meta-analysis relies on the pooling of data from across studies. This can be a pain because study reports are not usually written with the intention of having their results pooled with other studies. Reports of meta-analyses are sometimes even worse because there are a range of different summary statistics (Hedge’s g, Cohen’s d, odds ratios, risk ratios etc) that may be used.

There are all sorts of modern statistical approaches that allow you to pool data reported using different (but related) measures or the same measure reported in different ways. Things like shared parameter models, multinomial models, and latent variable models allow you to explicitly model the relationship between variables. As a result of this they have, to my mind, a good level of explanatory power and transparency. In other words, it can be clear how they work, so it’s possible for a reader to understand whether they are legitimate.

If you have quite a lot of data in a consistent format but just a couple of data points that need converting, the best approach can be back-calculation. This means taking the summary statistic you have and working backwards to try and uncover the data that generated it. The most common situation where this is relevant is where you are trying to do a meta-analysis and the basic data are very similar, but not quite the same. For example, sample means may be reported with varying measures of spread (e.g. standard deviations, standard errors, or confidence intervals).

The general approach to back-calculation is quite simple. Inferential statistics are based on the idea that we have a population of values from which we take a sample and calculate the statistic. That statistic has a sampling distribution. This is simply a distribution that describes how our sample statistic is expected to relate to the underlying population statistic. For example, we may assume that the mean of a sample of data (which we might call

) is randomly related to the population mean (which we might call

The process for back-calculation is:

An example of back-calculation

Now, let us suppose we are doing an analysis and we want all the data in a consistent format. The studies we are looking at all report the average test score for some children. Here are some data:

This is quite an involved process and involves knowing a fair bit about how statistics are calculated. Fortunately, we are often back-calculating between values we understand quite well.

This is something that crops up quite a lot in psychological work. For example, different measures of the same quantity (e.g. different algebra exams) may be recorded in different studies.

A common way of collating effects from different studies is to use correlation measures. The logic behind this is that a lot of different statistical comparisons can be thought of as forms of correlation. Let’s look at an example.

Suppose you want to look at the effect of coaching on exam performance. To do this, you could get two groups and coach one of them, then compare their exam performance at the end. This would be a group comparison, and their results might look like this: 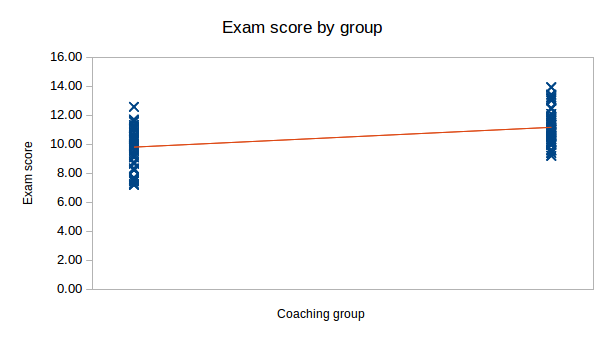 Alternatively, you could get lots of people and give them different amounts of coaching, then record their exam results. The results of this study might look like this: 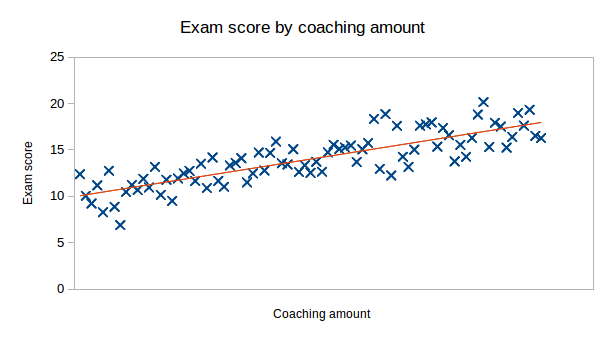 As these plots show, a two group comparison can be treated similarly to a correlation analysis. The important thing is to be able to scale the correlation coefficient appropriately so that the values are truly comparable.

This is very handy because it means that it is possible, with a few assumptions, to convert from a lot of statistics to a correlation measure,

. Some of the most common conversions are shown in the table below, which is heavily based on some material in an excellent book by David Clark-Carter. If you want a broad understanding of statistics for psychology, this is one of the best books I have read, and Clark-Carter gives lots more useful formulae.

While statistics can be reported in a highly variable way, if they are describing the same underlying process there is usually a way of relating them together. If the relationship is comparatively simple, for example an F-test with one degree of freedom or a 2×2

test, there’s a good chance that you can describe it using a correlation measure, or any one of the other popular effect size measures (Cohen’s